Let us start with the bad news : the strap Sean Connery wore in Golfinger in 1964 was not a NATO strap.

Many of us think the opposite, which has largely contributed to the sucess of NATO straps, but we believe that this watch band became famous mainly because of its characteristics and many benefits.

We widely detailed in other pages of this site attractive features of NATO strap, let us concentrate here on the myth "James Bond and NATO straps".

Indeed, if we dig a bit deeper, we  realize that we cannot split up NATO straps and James Bond...

Here is the demonstration.

James Bond made the nylon strap famous in Goldfinger in 1964, as shown in the photos below.

The nylon strap was installed on a Rolex Submariner réf. 6538, an iconic watch of James Bond (please notice the "British style" : a 16mm width strap on a 20mm lug width watch).

But the strap Sean Connery is wearing here is not a NATO for 2 reasons :

1. NATO strap was born in early 70s for British army while the movie was shot in 60s . Moreover, the first NATO strap was Grey (Admiral Grey), and other colors such as the one seen here came afterwards.

2. The photo below clearly shows that the straps worn by James Bond in Goldfinger had a nylon loop, unlike the NATO strap which has 2 stainless steel loops.

Why a nylon strap ?  To fit over James Bond's thick wetsuit (see photo below, once again in Goldfinger).

Please note that we are here strictely in the same spirit than with a NATO strap.

You have now the proof that Sean Connery's strap in Goldfinger was not the Original NATO strap.

In fact, James Bond wore a US Military strap. These straps are sold here on www.esprit-nato.com

Let us keep digging on connection between the mythical NATO strap and James Bond...

Below photo shows Pussy Galore, Goldfinger's private pilot, wearing a Coke Rolex GMT Master [Reference 6542] on a nylon strap. Her character was one of the first woman to wear a Rolex Sport Watch for men in a movie, and it was once again on a nylon watch band.

Let us introduce now the arrival of the real NATO strap in James Bond world...

We saw previously the many similarities between James Bond's nylon strap and the Original NATO strap.

When the myth becomes a reality !

No doubt, it is an original NATO strap as we clearly identify one of its stainless steel loops.

He chose the Black 2 Grey stripes NATO strap to go with this beautifull watch. This model is available here on www.esprit-nato.com, and named "Bond Craig".

Most of the time, when you hear about James Bond NATO straps, it is either "Original Bond" or "Craig Bond" seen hereabove.

By extension, we name "Bond" each 2 stripes strap (with or without borders).

All of them are available here on www.esprit-nato.com. 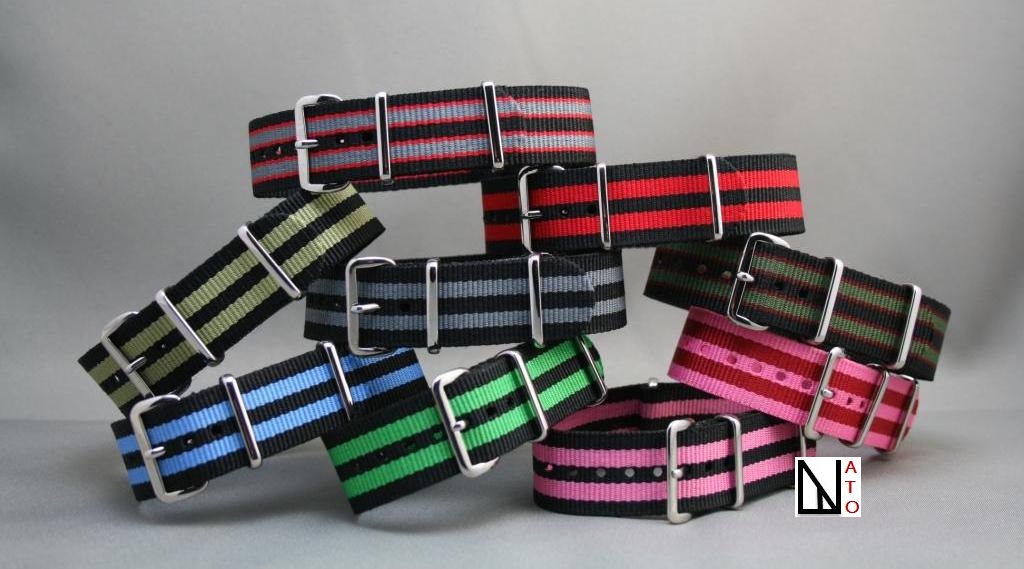 While having set the record straight, we hope you are now convinced that NATO strap and James Bond are connected forever.

However, if you want to watch Goldfinger again or to buy a "Bond" NATO strap, then it is a success :-)

And for purists, we suggest THE strap James Bond wore in Goldfinger... You just have to click.

With Esprit NATO, you change your watch straps quickly, without any tool, according to your wishes...